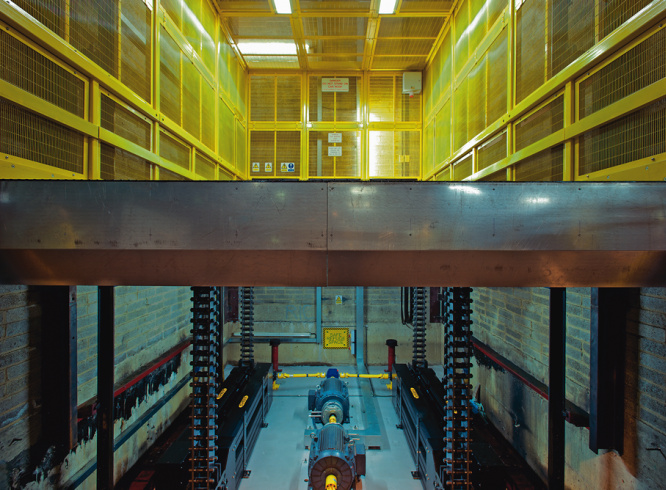 Serapid system serves as a drive system for lifts, hoists, trap lifts and stage wagons. This electrically powered system meets the highest security requirements. It complies, in particular, with the Machinery Directive as well as with current regulations on machine and device construction (including stage technology equipment).  Devices equipped with Serapid system can be CE marked.

The system consists of rigid chain columns (their number is determined by the specific application, usually two or four columns are used). Each column is built of  pinion that puts chain in motion and of  a chain tray. Chain is divided into different sections in such a way that its alignment is possible only in one direction. Owing to that it can be stored horizontally (without necessity of deepening the pit) while maintaining high stability and rigidity when it is aligned vertically. Another component of the system is a an electric motor, emergency brake, the system of reduction drives and drive shafts with clutches (number of parts and their setting is dependent on the specific case).

Rotating pinion in each column makes an individual chain link interlock to form a rigid and stable column. Due to the fact that chain can be aligned only in one direction, the application of at least two chain columns  turned to each other eliminates possibility of losing stability of device. To secure the entire lift system, guide lifts or scissor guides are introduced to keep stability.  The entire drive system is self-locking secured with additional safety brake, which protects the system against accidental movement in the event of power failure.

Trap lifts with Serapid system are equipped with integrated control system exclusively designed for certain application. Its power inverter provides a smooth start and stop as well as a variable speed control of trap lift.  The system is equipped with override control which means that button ‘start’ has to be pressed while lift is moving. Releasing the button will effect instant stoppage of the lift. Due to safety requirements the control system is also provided with emergency STOP button. In standard trap lifts are equipped with control panel with touchscreen.